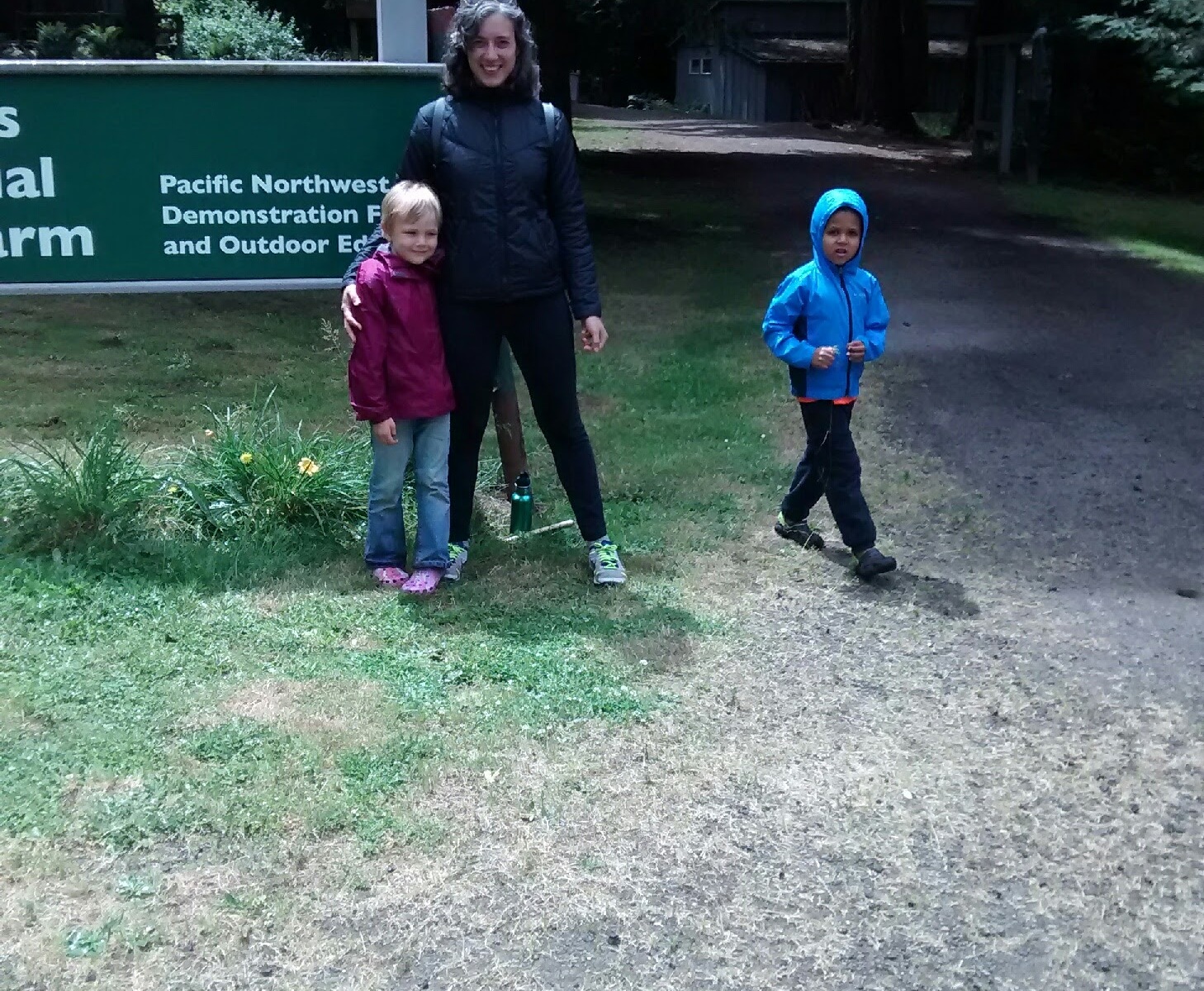 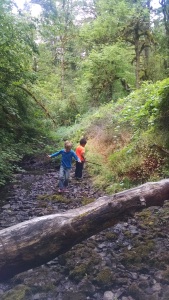 Well, sometimes when you go hiking with kids, you have to admit your failures…at least if you’re me! So, we went hiking with my friend Lotus and K’s friend N to Magness Memorial Tree Farm (which, by the way, is not a tree farm, but is a demonstration forest with hiking trails, a covered picnic area, and several cabins, in addition to some great trails). Magness is about 15-20 minutes from Newberg, just east of town on Parrett Mountain.

Since I’d been there several times before, I thought, “Piece of cake,” and didn’t really worry too much about maps. It was just the four of us, and we were happily wandering through the woods, exploring every side trail to the creek, some of us throwing rocks and sticks (guess which ones?), munching on wild berries, and eating snacks we brought.

Usually when we’ve gone to Magness before, we’ve gotten to the bridge along the Nagel Loop and gone left and done the Woods Tour and/or the Archibald Hike, including the fire lookout, but the boys wanted to go right because it went by the stream. I thought, “Sure, it loops around, so we’ll just do it in the opposite direction.”

Well, somehow we missed that important juncture where we would have stayed on the Woods Tour, and instead chose the Heater Trail. We kept thinking it would just loop around eventually, but then we finally found ourselves coming out on a road.

Thank goodness for GPS on my phone, because it told me which road we were on and which way to go to get back! We did eventually find the trail again, but not until after it poured on us while we were “hiking” along a paved road, five-year-olds not particularly happy about the whole thing.

The Heater Trail is apparently not very well used, and was somewhat overgrown in places. The trail was clearly evident, but for kids, there were tall grasses and blackberry vines swinging into their faces.

We found a small garter snake, and K and I stopped to look at it while Lotus and N walked on across a little bridge. Then, when K and I went to follow them across the bridge, we heard a bunch of angry bees. K stopped and started freaking out about the bees, and I said, “Keep going! Keep going!” I finally picked him up and carried him past the bees and couldn’t figure out why he was still crying, until I realized he’d gotten stung. Ouch! We later found some nice, cool, creek mud to put on it, and Lotus, being a nurse, helpfully had a full first aid kit with her.

This is probably something I should carry with me from now on, now that I think about it! She whipped it out and put on a Band-aid. 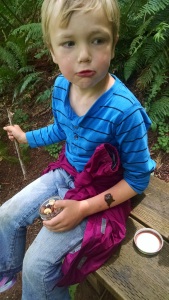 Drama also ensued regarding special sticks. (Note sticks in hand in the majority of these photos.) We had to go back several times after the boys forgot their sticks and refused to go on without them. This was after the bee incident, and during the walking-on-the-road incident, so we humored them.

After we finally made it back to our car and drove home, the boys had apparently forgotten the more negative parts of the journey, and were saying they’d had a great time. I hope I didn’t ruin hiking forever for N! 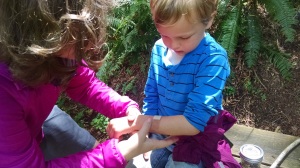 Magness Tree Farm is a beautiful location, and you should definitely go there. It is (usually) very kid-friendly and a wonderful place to hike and explore. They also do outdoor education, and they have little cabins, and it looks like you can book them and/or the picnic area for events, even weddings. (I went to a lovely wedding there once!) I’m not sure if you can just rent a cabin as a family, but it could be a fun alternative to Champoeg’s yurts if you want to stay in an outdoorsy location in the area.

This site uses Akismet to reduce spam. Learn how your comment data is processed.